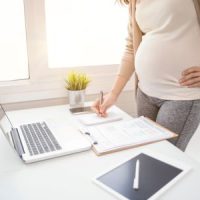 On April 26th, 2022, the Equal Employment Opportunity Commission (EEOC) announced that a $70,000 settlement has been reached in a pregnancy discrimination claim on behalf of an employee in North Florida. DLS Engineering Associates will pay $70,000 to a woman who had her job offer revoked after she disclosed her pregnancy status. In this article, you will find a more detailed explanation the pregnancy discrimination settlement and a step-by-step overview of your rights if you believed that you were denied a job opportunity due to your pregnancy.

The employer in this case is DLS Engineering Associates, LLC, an engineering consulting contractor with a main headquarters in Virginia Beach. The company had a federal contract at a site in Jacksonville, Florida. The employee applied for a position at the Jacksonville location and received an initial offer of employment to work as an engineering logistics analyst.

The EEOC sued DLS Engineering Associates, LLC for violations of the Pregnancy Discrimination Act. As part of the settlement reached by the parties, the employer will pay $70,000 in damages to the affected pregnant worker. Additionally, the company has entered a consent decree with the EEOC. It will revise its policies and conduct training on pregnancy discrimination in the workplace.

All employers with 15 or more total employees are covered by the federal Pregnancy Discrimination Act. Under the statute, it is unlawful for an employer to deny a job opportunity (initial position or promotion) to an employee simply because of pregnancy status. Here are three key steps to take if you believe that you denied a job due to pregnancy:

Get Help From a Pregnancy Discrimination Attorney in Florida

Pregnant workers deserve fair and equitable opportunities in the workplace. If you were denied a position, a promotion, or if you were otherwise treated unfairly due to your pregnancy, you may be entitled to compensation. Contact an experienced Florida pregnancy discrimination lawyer for help.

By Scott Law Team | Posted on July 27, 2022
« Can An Employee Get Out Of A Non-Compete Agreement In Florida?
Introducing Scott Law Team! »