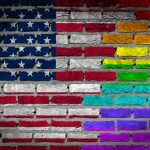 The U.S. Supreme Court Ruled on June 15, 2020 that the “Sex” Prong in Title VII Employment Discrimination Suits Extends to Gay and Transgender People