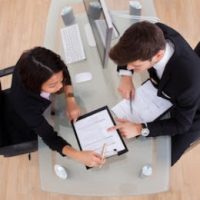 Dallas-Fort Worth Shuttle Drivers Not Permitted to Unionize

The NLRB oversees laws that enable workers to unionize and also engage in concerted activity to improve terms/conditions of the workplace (ie allows employees to band together to speak out on terms and conditions of the workplace without retribution). Of course, only those workers who are classified as “employees” are covered under the law – and specifically, non-managerial employees. So in many cases, the critical issue is whether or not a given group of workers qualify as employees in the first place.

In the case of SuperShuttle DFW, a company that operates a shared-ride service under contract with the Dallas-Fort Worth International Airport, the company contracted a number of “franchisees” to serve as the actual drivers. Each franchisee must pay an initial franchise fee plus an additional “weekly system fee” to SuperShuttle. The franchisees are also required to purchase or lease their own vans–which must meet certain SuperShuttle standards–and pay for their own gas, maintenance, and insurance.

The Amalgamated Transit Union (ATU) sought to organize and represent the franchisee drivers in collective bargaining with SuperShuttle. The ATU argued the franchisees were really employees, and not independent contractors as SuperShuttle maintained. A regional director for the NLRB disagreed, prompting the ATU to appeal to the full NLRB in Washington, DC.

In dismissing the appeal, a majority of the NLRB decided to take the opportunity to “overrule” a 2014 decision made by a previous Board regarding the proper legal test for classifying workers as independent contractors under the National Labor Relations Act. According to the current Board, the 2014 decision “significantly limited the importance of entrepreneurial opportunity” in assessing a worker’s status. The Board said it wanted to return to the “traditional common-law test,” which placed entrepreneurial opportunity at the center of its legal analysis.

What does this mean in practical terms? Basically, the more direct control a company has over its workers, the less “entrepreneurial opportunity” those workers have, and vice versa. In this case, the NLRB found that SuperShuttle did not exercise a great deal of direct control over the franchisees, meaning the latter had substantial entrepreneurial opportunity. As noted above, the franchisees owned and operated their own vehicles and only needed to pay certain flat fees to SuperShuttle. The franchisees were not required to work any set hours or pay a commission on their fares to SuperShuttle. Accordingly, the Board held the franchisees were not “employees” entitled to collectively bargain. As it is clear, these analysis of employees versus independent contractors are fact specific.

How Will the NLRB’s Decision Affect Other Areas of the Law?

It is important to note the shift in the NLRB’s position does not end the debate over the proper legal standard for classifying independent contractors. The NLRB’s authority is largely limited to collective bargaining and concerted activity issues like the one described above. Florida employers still need to exercise caution when classifying workers to avoid potential legal problems under other federal and state laws, such as the Fair Labor Standards Act or the Florida Civil Rights Act. If you have questions about employee classification, you should contact a qualified Florida employment law attorney right away.

By Scott Law Team | Posted on May 14, 2019
« Employer Practices in Florida: The Pros and Cons for Offering Employees Unlimited Vacation Leave
Florida’s “Bring Your Guns To Work Law”: Can Employees Have Their Guns at Their Florida Workplace? »