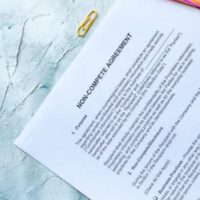 Recently, Representative Mike Garcia (R-California) introduced a bill called the Restoring Workers’ Rights Act of 2022 (RWRA). The bill has some support from both Republican and Democratic lawmakers in Washington. The RWRA proposes a federal ban on employee non-compete agreements for all workers deemed “non-exempt” under the Fair Labor Standards Act (FLSA). In this article, you will find a more comprehensive overview of the proposed legislation as well as the current law for employee non-compete agreements in Florida.

As drafted, the RWRA seeks to amend the Fair Labor Standards Act (FLSA). The FLSA is one of the most important labor laws in the country. It applies broadly to employers/employees across the country. Notably, the FLSA does not currently speak to non-compete agreement at all.

If amended as proposed by the RWRA, the FLSA would strictly prohibit the use of non-compete agreements for any employees who are classified as “non-exempt” under the FLSA. Non-exempt employees are those who are eligible for overtime pay. They are generally hourly workers who are in non-managerial/non-specialty positions.

To be clear, the RWRA is still a long way from becoming law. It would need to pass the House of Representatives, approved by the United States Senate, and signed by the President. Still, the federal push to restrict non-compete agreements should be monitored closely.

Your Guide to Florida Law On Employee Non-Compete Agreements

Get Help From an Employment Lawyer in Florida

Before signing a non-compete agreement, you need to be sure that it is in your best interests. If you have any specific questions or concerns about the drafting, negotiation, or litigation of non-compete agreements, please do not hesitate to reach out to a Florida employment lawyer for help.

By Scott Law Team | Posted on January 5, 2023
« Employee Rights: Debunking Four Of The Most Common Myths About Employment Law In Florida
Kroger Will Pay $180,000 To Resolve Religious Discrimination Claim »