DOL: $162,310 In Back Overtime Pay Recovered For Restaurant Workers In Key West, FL 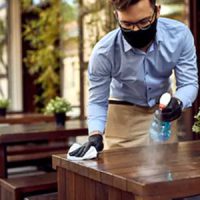 On June 3rd, 2021, the Department of Labor (DOL) released a public statement confirming that three Key West, Florida restaurants—Little Pearl, Thirsty Mermaid, and Antonia’s Key West—have been cited for unpaid overtime violations. In total, the federal agency reports that it collected more than $160,000 in back overtime pay on behalf of nearly four dozen employees. In this article, you will find more about the allegations and an explanation of an employer’s responsibility to ensure that workers hired through staffing companies are properly compensated.

The DOL is the primary federal agency responsible for enforcing the wage and hour provisions of the Fair Labor Standards Act. The agency launched an investigation into the three Key West, FL restaurants after being tipped off to possible overtime violations. Upon investigation, federal regulators determined that 45 employees were entitled to a collective $162,310 in unpaid overtime.

According to information released by the DOL, the non-exempt employees were paid straight time wages for all hours they worked, even though many of them put in more than 40 hours per week on a regular basis.

Notably, a significant portion of the workers covered by this wage and hour enforcement action were employed by staffing agencies, not directly by the restaurants in question. Indeed, that is the primary reason why these three restaurants were cited together in the same wage and hour action. All three worked with Paradise Hospitality Solutions LLC, a Florida based staffing agency.

In its press announcement explaining the action, the DOL emphasized a key point on federal overtime laws: when employees are retained by a company through a staffing agency “both are responsible for compliance” with the FLSA. In other words, Florida employers that use staffing companies are not protected against liability for wage and hour violations, including minimum wage and overtime laws.

Employers have a proactive, affirmative obligation to ensure that workers are properly compensated for their overtime hours. They cannot use the fact that they went through a staffing agency as a defense. If you are an employee that was hired by a staffing agency and your overtime rights were violated under the FLSA, you can bring a claim against both your employer and the staffing company.

The Bottom Line: Temporary, seasonal, or leased employees in Florida are fully protected under all applicable federal wage and hour laws. Employers must ensure that these workers are fairly compensated for any overtime work.

Get Help From an Unpaid Overtime Employment Attorney in Florida

When non-exempt workers put in overtime hours, they are entitled to overtime pay. An employees’ legal rights under the Fair Labor Standards Act (FLSA) must be respected. If you or someone you know was improperly denied overtime pay, contact an experienced Florida wage and hour claims attorney for immediate legal guidance.

By Scott Law Team | Posted on September 8, 2021
« Can A Florida Employer Discriminate Against LGBTQ Workers Based On Customer Preference?
Florida Is A ‘Right-To-Work’ State: Here Is What That Means »