Close Menu
+
Connect with us
Florida Labor & Employment Lawyer > Blog > Uncategorized > Artificial Intelligence in the Workplace and Discrimination: The Future of Work

Artificial Intelligence in the Workplace and Discrimination: The Future of Work 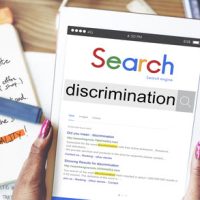 A major benefit to progressive technology is automating routine tasks for efficiency. For instance, many businesses may use computer programs like Quickbooks or even Microsoft Excel to assist with mathematical equations to help run an efficient ledger.

But there are some aspects of business where automation can raise significant legal issues. Let’s consider one critical area of management where businesses often look to increase automation–hiring new employees. After all, when a business is bombarded with hundreds of resumes, CVs, and online applications for a given position, it is understandable that hiring managers would seek out a way to use technology, such as a computer algorithm, to sort out the most promising applicants.

The problem is that an algorithm is only as good as the people who program it. And while a computer may not have any built-in biases towards certain groups of people, the algorithm the computer system uses could result in screening out a certain class of people.

For example, last October the online magazine Slate reported on efforts by Amazon, one of the world’s largest retailers, to “mechanize the company’s head-hunting process, by creating a program that would scour the Internet for worthwhile job candidates.” The idea was that an algorithm would review 100 or so resumes, and return only the 5 best candidates for a position. In theory, this would save Amazon’s hiring managers hundreds, if not thousands, of man-hours each year.

But in practice, Amazon’s artificial intelligence team quickly discovered the algorithm they created “was biased in favor of men when it came to hiring technical talent, like software developers.” As Slate explained, the AI examined prospective job candidates based on “terms that had popped up on the resumes of past job applicants.” But since there was a pre-existing bias towards men in the tech world, most of those past applicants were obviously male.

In other words, Slate noted, Amazon’s AI “taught itself that male candidates were preferable” to female candidates. To make matters worse, the AI emphasized the use of “macho verbs” on resumes as opposed to looking at actual technical qualifications. Eventually, Amazon management abandoned the algorithm altogether.

Even if a business is not keen on developing its own artificial intelligence for job applicants, many businesses do rely on third-party services, such as Facebook and LinkedIn, to advertise job vacancies. And these services can make it far too easy to post “targeted” ads that effectively shut certain candidates out of the market. For instance, the New York Times and ProPublica reported in December 2017 that Facebook allows employers to target ads to particular age groups–which raised concerns that the social media giant may be aiding and abetting illegal age discrimination.

And there lies the core issue. Technology may enable employers to precisely target certain preferred groups, but federal and state anti-discrimination laws forbid excluding certain groups from access to the job market. So even if a company does not intend to discriminate, its over-reliance on algorithms and AI to recruit new candidates may effectively constitute illegal discrimination by screening out certain individuals based on their protected traits – like age, religion, national origin, gender, disability, religion, or race.

If you have any questions or concerns about whether your own company’s hiring practices are following state and federal anti-discrimination rules or you believe you were denied employment because of discrimination, you should speak with a qualified employment law attorney right away.

By Scott Law Team | Posted on February 27, 2019
« What Is a Chief Freelance Officer and Do I Need One in My Workplace?
Can Florida Employers Require All Job Applicants to Take Drug Tests? »