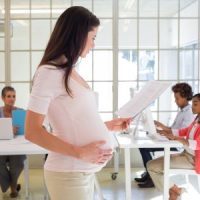 On May 16th, 2022, the Equal Employment Opportunity Commission (EEOC) officially announced that Presidente Supermarket No. 31, Inc.—a grocery store based in Miami, Florida—has agreed to pay $75,000 to an employee who was the victim of pregnancy discrimination in the workplace. The suit came after a worker was fired when a manager found out about her pregnancy. In this article, you will find a more complete review of the allegations raised against the employer in Miami-Dade County.

Allegations: A Cafeteria Employee Was Fired After Manager Learned of Her Pregnancy

A cafeteria employee at Presidente Supermarket No. 31, Inc. learned that she was pregnant. Soon after, she shared this information with her co-workers. When a manager found out about her pregnancy status, the employee received a phone call stating that she was no longer needed. She was terminated from her position at the Miami grocery store.

Notably, the statute also treats pregnancy complications similar to other types of legally protected temporary disabilities. While a worker should not be presumed to be “incapable” of continuing to perform her job while pregnant, she may be entitled to reasonable accommodation to help her navigate pregnancy-related complications. For example, a pregnant worker may be granted additional short rest breaks during the course of the work day.

Get Help From a Pregnancy Discrimination Attorney in Florida

Are you a pregnant employee or job applicant in Florida who has been discriminated against in violation of the Pregnancy Discrimination Act? If so, you may have a claim to recover compensation for your damages. Contact an experienced Florida pregnancy discrimination lawyer for help.