Florida Wal-Mart Sued By The EEOC For Allowing Sexual Harassment 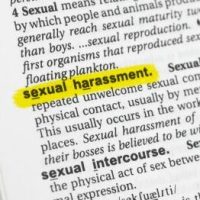 On September 21st, 2021, the Equal Employment Opportunity Commission (EEOC) announced a workplace sexual harassment lawsuit against Wal-Mart. According to the allegations raised by the federal agency, the company allowed a male employee of a Wal-Mart retail location in Walton County, Florida to sexually harass at least three female coworkers. In this article, you will find a more detailed review of the complaint and an overview of sexual harassment law.

The EEOC filed a lawsuit against Wal-Mart in the United States District Court for the Northern District of Florida. In the complaint, the EEOC alleges that a male employee of a Wal-Mart in Defuniak Springs, FL was allowed to sexually harass three female coworkers. The alleged misconduct in question occurred in the summer and fall of 2018.

During that time, the EEOC alleges that the Wal-Mart employees were subjected to repeated sexual harassment by their male coworker. The misconduct involved offensive comments and inappropriate, unwanted physical contact. One of the female employees complained to the store’s management. Four days later she was fired. No action was taken against the alleged harasser.

EEOC is Seeking a Wide Range of Remedies for the Employees

In its lawsuit against the Walton County, FL Wal-Mart store the EEOC is seeking all available remedies on behalf of the affected employees. The federal agency states that it attempted to reach a pre-litigation settlement with the company, but was not successful. Among other things, the EEOC is requesting:

In its press release related to this matter, the EEOC emphasized that it takes allegations for retaliation against sexual harassment victims very seriously. It is a point of emphasis in enforcement. Workers have a right to report sexual harassment. They should never be subject to unfavorable treatment for doing so.

Employers are Responsible for Employees, including Non-Managers

Get Help From a Workplace Sexual Harassment Lawyer in Florida

By Scott Law Team | Posted on December 1, 2021
« DOL Is Reviving 80/20 Rule For Tipped Employees: What It Means
Wage And Hour Laws In Florida: What To Know About The State’s Paycheck Deduction Laws »