Close Menu
+
Connect with us
Florida Labor & Employment Lawyer > Blog > Labor and Employment > Can a Florida Employer Ban Employees From Discussing Their Pay With Each Other?

Can a Florida Employer Ban Employees From Discussing Their Pay With Each Other? 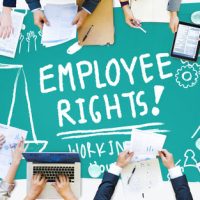 Pay discrimination on the basis of sex violates an employee’s rights to equal treatment in the workplace. But, how is someone even to know that they are getting paid less than their counterparts? Oftentimes, employees are unaware they may be the victims of pay discrimination simply because they do not know how much their co-workers earn.

And many Florida employers want to keep in that way. Employee handbooks often contain language declaring salary or wage information “confidential,” i.e. a type of trade secret. By this logic, if two co-workers discuss their salaries they are breaching their duty to keep information confidential and are subject to disciplinary action–including termination. Pay secrecy policies in companies are common, and while many states have passed laws prohibiting pay secrecy policies in the workplace, Florida has yet to pass a pay secrecy law. However, even in the absence of state legislation, some employees have found success fighting pay secrecy policies under federal law.

The NLRA and Employee Rights to Engage in “Concerted Activity”

Can a company really enforce this kind of “pay secrecy” rule against its employees? Under federal law, the answer is generally “no.” The National Labor Relations Act (NLRA) provides that workers have a right to engage in “concerted activity for mutual aid or protection.” Normally we associate the NLRA with the right to unionize, but it protects other forms of “concerted activity,” as well. This includes employees who choose to exchange information regarding their pay, wages, and other terms or conditions of employment.

In other words, a Florida private employer who threatens to discipline or fire an employee for discussing their salary with a co-worker may be violating the NLRA. Some states, such as California, have gone a step further and adopted local laws that expressly forbid employers from requiring an employee “refrain from disclosing the amount of his or her wages” as a condition of employment. But even in states like Florida that have not adopted such legislation, the NLRA remains in full force.

Additionally, if your employer does business with the federal government it may be subject to a series of 2016 Department of Labor regulations that “prohibit federal contractors and subcontractors from discharging or otherwise discriminating against their employees and job applicants for discussing, disclosing, or inquiring about compensation.” These regulations go beyond the NLRA and require a federal contractor to amend its employee handbook, if necessary, to make it clear that employees have the right to discuss pay-related issues among themselves without fear of retaliation.

So what happens if a company still decides to enforce a “pay secrecy” policy in defiance of the NLRA or Labor Department regulations? In the latter case, the employer can lose its federal contracts. As for the former, the National Labor Relations Board has the authority to act on behalf of the affected employees. For example, in a 2013 case the Board ordered a Texas employer to reinstate an employee who was fired for “discussing salaries with other workers.” The employer also had to pay the employee over $100,000 in damages and change its internal policies to remove any references to pay secrecy.

Cases like this illustrate the substantial legal risks of a pay secrecy policy for any employer. If you are a Florida employer or employee and have questions about the law and pay secrecy rules, contact an experienced Florida employment law attorney to discuss your concerns.