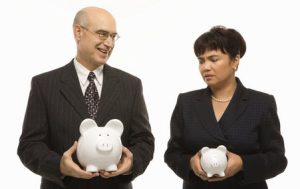 Does your employer have a policy preventing you from discussing pay with coworkers? Just because it is a rule by the employer doesn’t mean that it is legal under the law.

Given that many advocates for equal pay and gender equality are working to clarify distinctions in salaries based on an employee’s gender, knowing what men and women earn for doing the same work can be enormously important. To be sure, pay secrecy policies—requiring employees to avoid discussing their salaries or earnings with other employees—actually are illegal.

Before we discuss the importance of putting a stop to pay secrecy policies, it is important to understand precisely what they entail. In short, pay secrecy is a workplace policy that prohibits employees from discussing how much money they make, especially with their coworkers. Sometimes such policies are written (as in an employee handbook), while sometimes they are merely implied (by a supervisors, for instance, who encourages employees to avoid discussing their compensation at work).

In order to create transparency with the ultimate goal of closing the gender wage gap, President Obama targeted pay secrecy policies and issued two executive orders last spring. The first executive order focused on information gathering. It directed the Department of Labor to collect more information on what federal contractors pay their employees so that pay discrimination can be spotted more easily. The second executive order made clear that federal contractors are prohibited from retaliation when their employees discuss their salaries or other forms of compensation with others in the workplace.

We should not actually need executive orders to make clear that pay secrecy policies are illegal. To be sure, the National Labor Relations Act (NLRA), which has been in force for more than 80 years, already clarifies that employees already have a right to take part in concerted activities for the purpose of collective bargaining or other mutual aid or protection. What this language means is that co-workers get to talk together about things that matter to them at work. And compensation is something that is permitted under the NLRA.

The National Labor Relations Board (NLRB) routinely has held that written pay secrecy policies violate federal law. But what about implied ones? When an employer is found to have violated the law by having a pay secrecy policy—written or implied—the employer must offer remedies. However, those remedies typically are not sufficient to deter such behavior in the future. Hopefully, the executive orders might be able to do more.

If you have questions about filing a claim related to a pay secrecy policy and/or for discriminatory pay, an experienced employee rights lawyer can help. Contact Scott Law Team today.