Close Menu
+
Connect with us
Florida Labor & Employment Lawyer > Blog > Employment Law > Can I File A Discrimination Lawsuit If I Was Passed Over For A Promotion?

Can I File A Discrimination Lawsuit If I Was Passed Over For A Promotion? 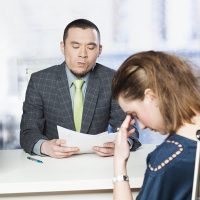 Promotions matter. Not only can a promotion lead to better pay and better benefits, it can help an employee advance their career—both inside of their current company and at any company that they work at in the future. The unfair denial of an opportunity to compete for a promotion can cause real harm to an employee.

This raises an important question: Can I bring a discrimination claim if I was denied a promotion? The answer is ‘yes’—but the claim will only be successful if you can prove that you were denied the opportunity due to discrimination against a protected characteristic. Here, you

will find a more detailed overview of discriminations claims for the denial of a promotion.

The Bottom Line: You can file a discrimination claim for denial of a promotion. It can qualify as an adverse employment action. Denial of promotion is unlawful discrimination if it happened, at least in part, because of a protected characteristic such as race, gender, disability, or pregnancy status.

Proving Denial of a Promotion on Discriminatory Grounds Can Be Challenging

Workplace discrimination claims are complicated. They can be especially challenging in denial of promotion cases. By definition, these claims are typically filed by employees who still (or recently) worked for the employer in question. The claimant (employee) may even have an otherwise good relationship with their employer. Still, denial of a promotion on discriminatory grounds remains a problem in Florida and throughout the United States. To bring a successful discrimination claim after being passed over for a promotion, an employee must be prepared to present strong and compelling evidence.

Evidence generally fits into three broad categories. The first category is personal. It includes all of your interactions, including any negative comments made to you that may indicate discriminatory animus. The second category is about the employer. It includes the employer’s general promotions practices. An example would be an employer’s consistent lack of promotion for female employees. The final category is focused on comparative. If the employer promoted a less qualified candidate who did not have the same protected characteristic, that could be evidence of discrimination.

Get Help From a Workplace Discrimination Lawyer in Florida

Every worker deserves equitable opportunities in the workplace—including the opportunity to advance their career through a promotion. If you or your loved one were denied a promotion on discriminatory grounds, contact a Florida employee rights attorney for immediate assistance.